YUNGBLUD: ‘I Wrote an Album for the Weirdest Years of Our Lives’ That attitude, and his accessibility on social media, make the 23-year-old pop-punk star one of Gen Z’s most relatable artists, which is reflected on his new album, Weird! – dropping Friday, Dec. 4. His challenges compare to many other young adults in the COVID age: heartbreak, depression and attempting to accept yourself in a world full of people who don’t accept you. He tackled these topics — and other social issues like sexual abuse and gun violence — on his debut album, 2018’s 21st Century Liability, and his 2019 EP, The Underrated Youth.

“This record [Weird! is about] getting through whatever is gonna fucking hurt you,” YUNGBLUD says.

In a community where he no longer feels like an outcast, YUNGBLUD loved meeting and speaking with as many fans as possible — fortunately before the pandemic hit. He took these deeply wounded, raw, real-life stories and turned them into an album that speaks the truth.

“I felt like I’d been kind of downtrodden and overlooked my whole life, but this album is about the community of people who made me feel like it was alright to be who they are,” he says.

YUNGBLUD spoke to SPIN about the influences behind his new album, personal acceptance and channeling his energy into relatable music. SPIN: You managed to complete an album during the pandemic. What challenges did you face writing and recording Weird!, and did you have to adapt your typical process during the quarantine?
YUNGBLUD: No, not really. Because it’s mostly me who was writing it, most of it was done before this thing hit. It was more about mowing it out during the quarantine. I think I always work best when I got something to kick against. I feel more connected to my fanbase than ever right now — I wanted to think out of the box and really make the idea resonate that just because we can’t touch each other doesn’t mean we can’t feel each other. I wrote an album for the weirdest years of our lives.

Would you say it’s a combination of personal experiences, growth, influence from others that really inspired this album?
I think with this record, I’m showing my emotions because I don’t have to hide behind the insecurity of anger and rage anymore. I don’t have to put up a front because I know, no matter what, I’ve got a community of people that are gonna accept me and love me for who I am. It’s just getting bigger by the day, and I can’t even believe how big it’s got…it’s like what?!

You’re kind of all just growing up together and gaining confidence together.
That’s the point. It’s like YUNGBLUD ain’t me, YUNGBLUD is us. YUNGBLUD is whatever you want it to be. I think that’s it and I think with this record man, it’s about them and the stories they’ve told me. It’s their record. But how those stories impacted my life and kind of shaped my existence. I wanted to write an album that’s fucking real. I’m bored of bullshit. I’m almost the same age as you so I feel a lot of the things that you’re writing.
And that’s it! I wanna tell the truth. In a world where people are fabricating, in a world full of agenda, I’m like, “Fuck that, let’s just cut the bullshit and actually be real with each other.” I was at the Grammys and some fuckin’ geezer comes up to me and goes, like, “Hey man, what’s the formula?” And I’m like, “Of course you’re asking that” because something out of the box to them is “work” or whatever, and it’s not about that. It’s never about anything other than meeting people. Person by person, connecting to them, listening to them, talking to them and then writing about it. I know this is an album for my generation and generations to come because it’s come directly from them. The words are theirs. I just put music to ‘em.

How would you describe the new sound of this album? Your first one, you said, was “more angry,” and this one seems to come more from a place of love and acceptance.
Completely. The first record was made in a damp basement in London with a load of weed. And naivety and anger and fuck it! I’m just getting it out without thought. It was completely full of contradictions, but that’s the beauty of it. It’s me at 19 years old going, “I’m sick to death of being downtrodden. I’m sick to death of being fuckin’ spat on. Is there anyone out there like me? And then it was like, “Fuck me, man. There are nearly 5 million people out there like me.” They came into the world of YUNGBLUD. But this record, it has a depth to it. It has layers to it. Because, one, I’m going through the forming years of my life. But the stories I’ve heard and the people I’ve met just ensued me with so much passion and it made the sound of the music bigger because these stories deserve that. And I’m just bursting right now with energy because they give it to me every fucking day. 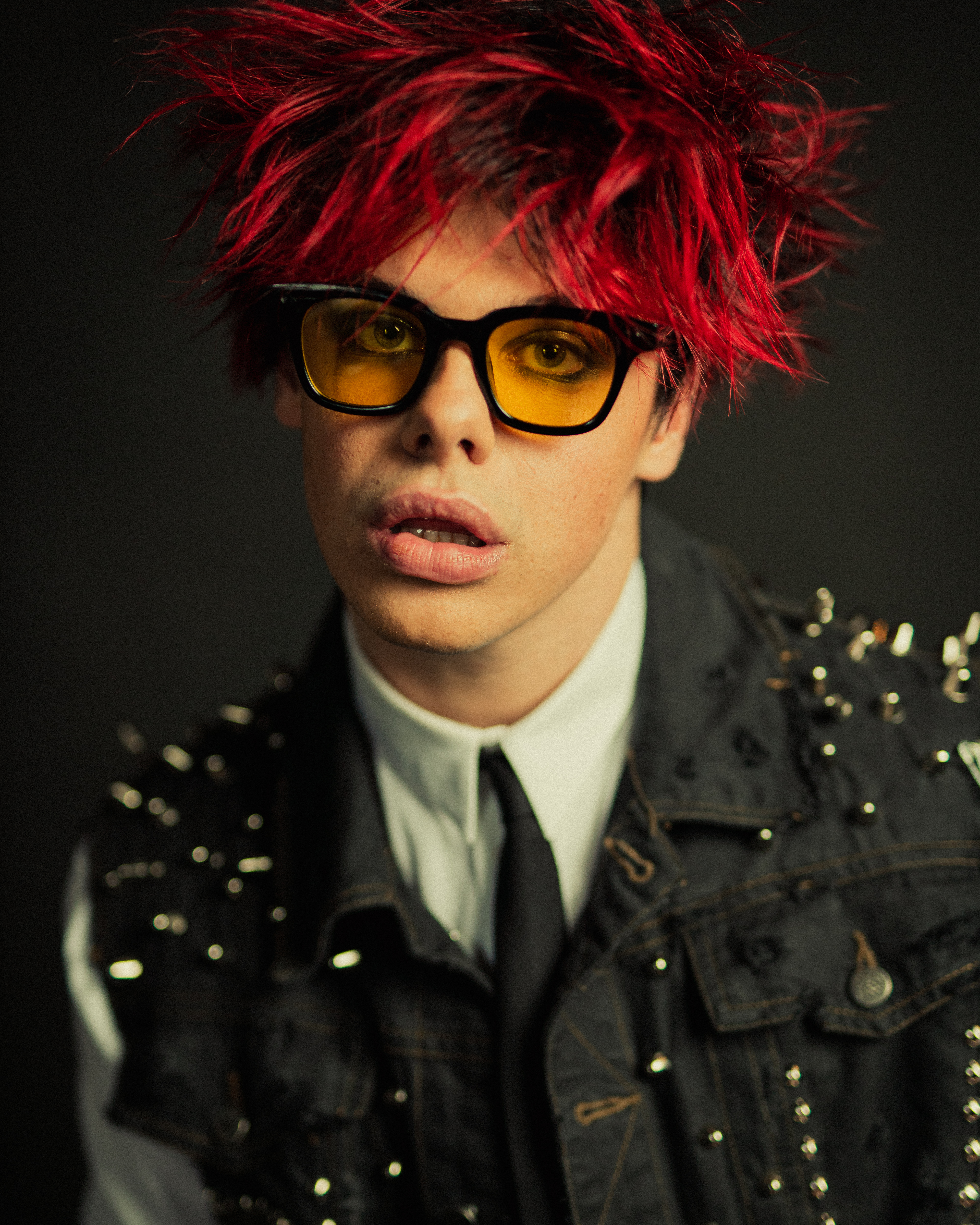 People always say to me, “How the fuck have you got so much energy all the time?” Because I wake up every day and belong somewhere, and I’m fuckin’ inspired. And I’m excited to meet new people, to hear their stories, to get my life saved every single day by, not some fucking guru, but by a kid in Texas or a young person in Nijmegen, Holland or a 35-year-old dude who just got over his suicidal thoughts in Sydney or a young trans girl in Maryland who can’t come out to her parents because they don’t understand she’s trans until they come to a show and realize there are other kids like her with the reluctance to be anything other than who they are. And after coming to a YUNGBLUD show, the parents accept her for being a woman, not their son. This shit that I hear, because of the community — it’s not me. I did nothing. We did everything. We did. It’s a community of people that’s bringing people together and like changing people’s lives. And I’m so proud to be a part of it.

What was your personal journey to self-acceptance like? What challenges did you face growing up and coming into your own?
I grew up in a place basically like Detroit: a very industrial, rainy, working-class place. And for a kid who wants to wear fucking nail polish, makeup and a skirt on stage thinking he’s Mick Jagger, it’s not exactly very easy. I remember I went into school wearing nail polish on and the teacher pulled me up in front of the whole class and said, “Boys don’t wear nail varnish,” and everyone laughed at me. I was like, “Fuck, man, I’m like 11 and getting my fucking bowels ripped out in front of me and everyone is laughing.” But I think that made me who I am and gave me the fire to be, like, “If I can’t belong in this world then I’m gonna build a world where I can exist, and I don’t want anyone else to feel like this. I’m gonna work my fucking hardest and try my best every day so no feels like that.”

The music video for “God Save Me, But Don’t Drown Me Out.” What was it like directing a video to a song that you wrote? Especially because it draws from experiences that you’ve been through, what does that feel like?
Well, one, I didn’t sleep a lot..for like three weeks cause I was like fuck, we had to pull everything together. But I just had the idea, I was actually in L.A. and I remember, it was four in the morning in the studio and eight months of shit that I’ve been bottling up was about to come out and I was about to cry my fuckin’ eyes out. And I was playing the album for the label the next day, and there was one piece missing and “God Save Me” was the last song written. I could feel the shit crawling up my back. I was like everyone please make a coffee and they’re like it’s 4 am Dom, we’ve gotta go to sleep man. And I was like, fuck it I’m just gonna go straight to the label there’s something happening here. I [said] to my guitar player, play “jing jing jing jing jing jing jing jing jing jing.” And then I said to my bass player Chris, my producer, play bass for me, “doom doom doom doom doom…” and I got in the booth and I just started crying my fuckin’ eyes out. Because everything in that video, every single thing where your girlfriend’s saying you’re not good enough, your parents saying you’re not good enough, the outside world, your teachers saying you’re not enough, this song is for anyone laying in their bedroom at 4 am wondering why the fuck they’re not good enough.

And I couldn’t figure it out, but I knew, when I was crying my eyes out, I was gonna be alright…I could see them in their fuckin’ rooms listening to it while I was singing it. And I almost grew up two years in two minutes when I was writing that tune. The vocal take is legitimately me just crying my eyes out, and the song was written in an hour and then two days later I had the idea for the video. Like, we’ve all got our own little inner teddy bear or our inner comfort. We just gotta let it speak sometimes. It might just save our lives. And no matter how dark or weird or confusing or strange it might get; it’ll be alright cause we’ve all got each other. And that’s just what I want to radiate.