Saturday Night Live is really working the double-duty hosts/musical guests this season.  Megan Thee Stallion just appeared as both last night (Oct. 15) and the show announced that Jack Harlow will be the next in line to host and perform on its Oct. 29 episode.

It will be the first time Harlow hosts the late-night sketch show. Last year, he made his first appearance as the musical guest on the Maya Rudolph-hosted episode. Harlow has been cutting his hosting chops as of late, recently appearing on The Tonight Show Starring Jimmy Fallon in which they split duties at the desk. In the episode, which aired on Oct. 6, Harlow helped Fallon with his monologue and interviewed guest Dwayne Wade. Ironically, Harlow followed Megan Thee Stallion in that role too.

In addition to Megan Thee Stallion, Kendrick Lamar and Willow have served as musical guests on SNL. This is the sketch comedy show’s 48th season.

Harlow’s latest album, Come Home The Kids Miss You, was released in May. In 2020, Harlow released his debut album, That’s What They All Say. Harlow was the subject of our January 2021 cover story, which you can read here. 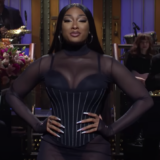