Time fades away, indeed. Neil Young‘s Harvest, his most commercially successful album and one of the most enduring rock releases of all time, will be reissued in a 50th anniversary edition on Dec. 2 via Reprise. It will be available in two-LP/7″/two-DVD and three-CD/two-DVD incarnations.

Both editions include Young’s long-bootlegged Feb. 23, 1971 BBC In Concert performance (a version of “Heart of Gold” from that show is out today) and the previously unreleased two-hour documentary Harvest Time, which chronicles the making of the album.

A three-song 7″ vinyl single is exclusive to the vinyl box, and features the first physical release of the Harvest outtakes “Bad Fog of Loneliness,” “Journey Through the Past” and “Dance Dance Dance.” 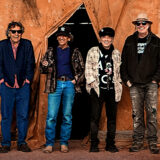 Young’s fourth solo album, Harvest includes some of the artist’s all-time best work in the form of “Old Man,” “The Needle and the Damage Done,” the title track and “Alabama.” A host of fellow stars appear throughout, including James Taylor, Linda Ronstadt, David Crosby, Stephen Stills and Graham Nash. Young good-naturedly answered some questions based on lyrics from Harvest songs in a 1988 SPIN interview that can be read here.

As previously reported, Young re-teams with Crazy Horse on the upcoming album World Record, which was produced by Rick Rubin. It will be released Nov. 18.