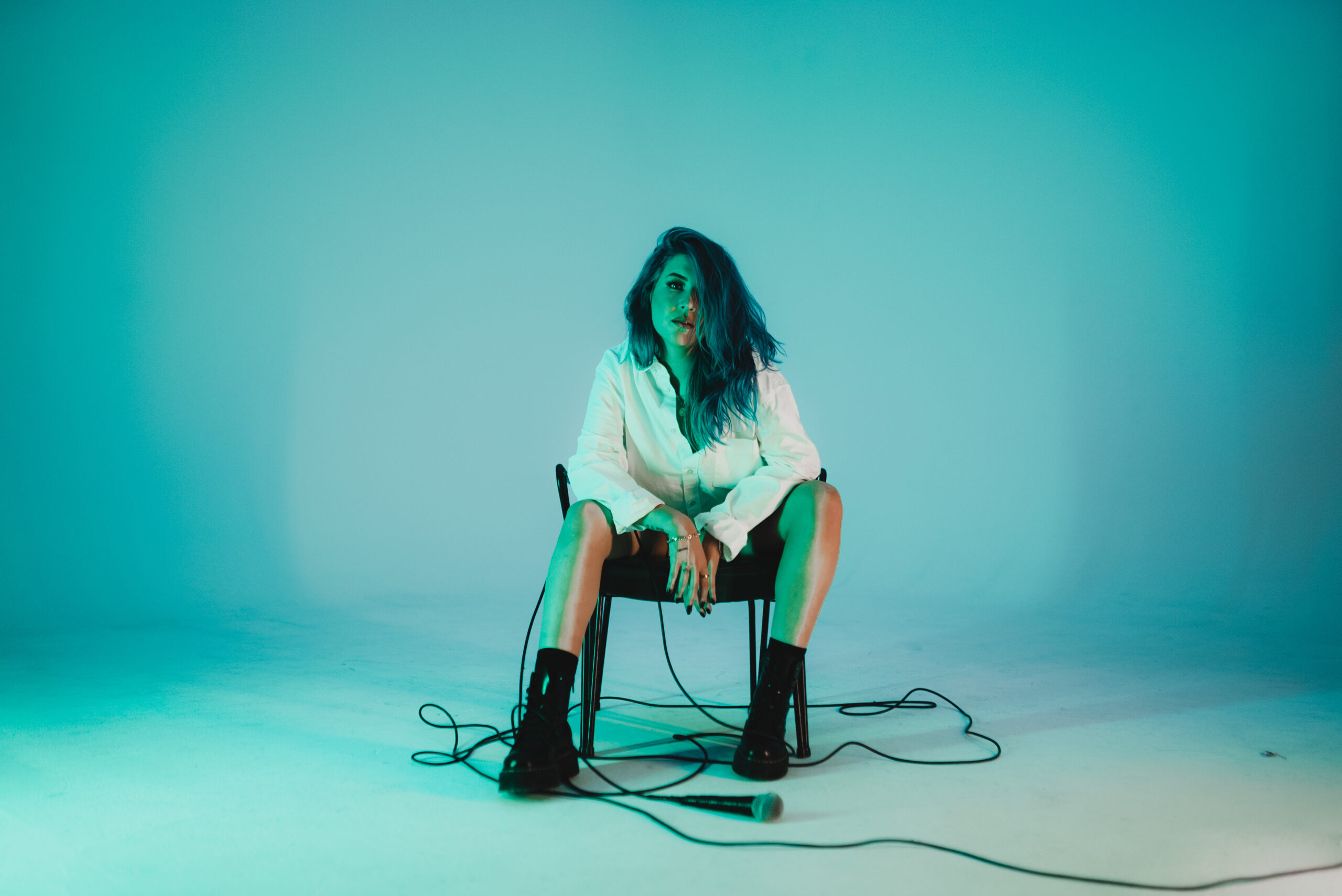 When Charlotte Sands posted a TikTok at the beginning of COVID asking Yungblud to let her open for him on tour, she didn’t know that it would actually happen. The idea was something the blue-haired singer-songwriter had been putting into the universe for a while, and it finally seemed like her unrelenting hope was paying off.

“I genuinely have been manifesting opening for [Yungblud on tour] for about two years now,” Sands laughs over the phone between hours of tour rehearsals in Nashville. “I’ve always been a fan of his message and everything he represents as an artist and as a person. He has always been a really big idol for me.”

Born in Massachusetts to a musician father and actress mother, Sands was always surrounded by music. As a kid, she found herself inspired by storytelling songwriters like Bonnie Raitt, Sheryl Crow and Grace Potter. By her teen years, she began writing music and discovered emo and pop-punk bands like All Time Low and Taking Back Sunday. Trying to find that middle ground between those 2000s rockers and childhood favorites has been an ongoing challenge she’s embraced as an artist ever since she moved to Nashville two weeks after high school ended.

“The quest that I’m on is trying to mix all those influences together,” she says. “Because they are so weird and are different parts of who I am as a person and as an artist.”

After years of building up her songwriting chops, the stars finally seem to have aligned for the 25-year-old alt-pop singer. At the end of 2019, Sands signed a publishing deal and became a full-time songwriter. By February 2020, she headlined her first sold-out show and planned to tour both coasts. Of course, the COVID-19 pandemic then put those plans on hold.

In the interim, her fanbase grew exponentially thanks to a viral song. In November 2020, Sands penned “Dress” — a direct response to conservative pundit Candace Owens and the negativity surrounding Harry Styles’ Vogue cover where he sported a Gucci ball gown. “I love the way you wear that dress / Making everyone upset / Burning that cigarette, boy / Swear to god I’ll confess, boy,” she swoons in the chorus. It didn’t take long for the song to blow up on TikTok, and it currently has 1.3 million views and counting. For Sands, the surprise hit wasn’t just a statement about redefining masculinity.

“‘Dress’ started from a place of me realizing that my type — the kind of people that I’m attracted to — had changed,” she says.

The success of “Dress” gave Sands some much-needed momentum to carry on despite quashed tour plans. In November, Sands finally released her debut EP, Special — a six-song compilation of vulnerable pop-punk anthems — and now she’s followed it up with Love and Other Lies, an EP that combines her raw folk songwriting and alt-leaning melodies. In developing the framework of her sound for these two EPs, she’s found inspiration in Kelly Clarkson, P!nk, Avril Lavigne and Katy Perry.

“These incredible women were so angsty, and they always felt like they weren’t doing what they were supposed to do, but in the best way,” she says. “They were always kind of rebellious and different and outspoken. Pop music has certain stigmas for women to create certain types of music about certain types of emotions or relationships. It’s really amazing to see female artists have this place where they can be angry, make aggressive music, be energetic and all these things, and people are applauding them.”

This mentality fuels Love and Other Lies, a seven-song amalgamation of tenderness, rage, heartbreak and jealousy. Ahead of the EP release, Sands shared “Every Guy Ever” — a sticky anthem about being fed up with manipulative men. A few months later, she dropped “Keep Me Up All Night,” a pop-punk gut-punch about being in love with someone and watching them be in love with someone else. That emotion also bled into “All My Friends Are Falling in Love,” a track that encompassed the loneliness Sands felt during lockdown as the regular fifth wheel with her coupled-up friends.

“It’s probably one of the hardest universal feelings, feeling unwanted or left out,” she says. “I remember crying in the bathroom [during lockdown] and having this overwhelming sense of loneliness in knowing that I was the only one going home to nobody and I live alone.”

Perhaps the most striking moment on the EP is also the softest. On the title track, Sands warbles about her family dynamic in a hazy ballad. But its opening is particularly meaningful for Sands. For two years, she held out hope that she’d play her biggest gig yet: Bonnaroo. But bad luck struck the festival again in 2021 and the site flooded, officially canceling the event. It emotionally crushed the singer, until her mom called when she needed it most and left her an encouraging voicemail. It’s stuck with her, and she thought it could help her listeners, too.

“Some people don’t get to have moms call them and tell them helpful, inspirational things to get them out of where they are,” she says. “Because they don’t have that, they can have my mom.”

Despite releasing two EPs in such a short period of time, Sands isn’t necessarily rushing to release an album. It’s something on her radar, but she’s got plenty of other ambitions for now — like dream collaborations with Yungblud, Machine Gun Kelly, Raitt, Perry or Gwen Stefani in the future. Slowing down isn’t even on her radar.

“I’ve always lived with the idea that you have to earn the time and attention of an album,” she says. “I think it really has to do with where I am. There’s a lot I have to check off my list in the next few years.” And she’ll get to that album… eventually.

Tags: All Eyes On, charlotte sands