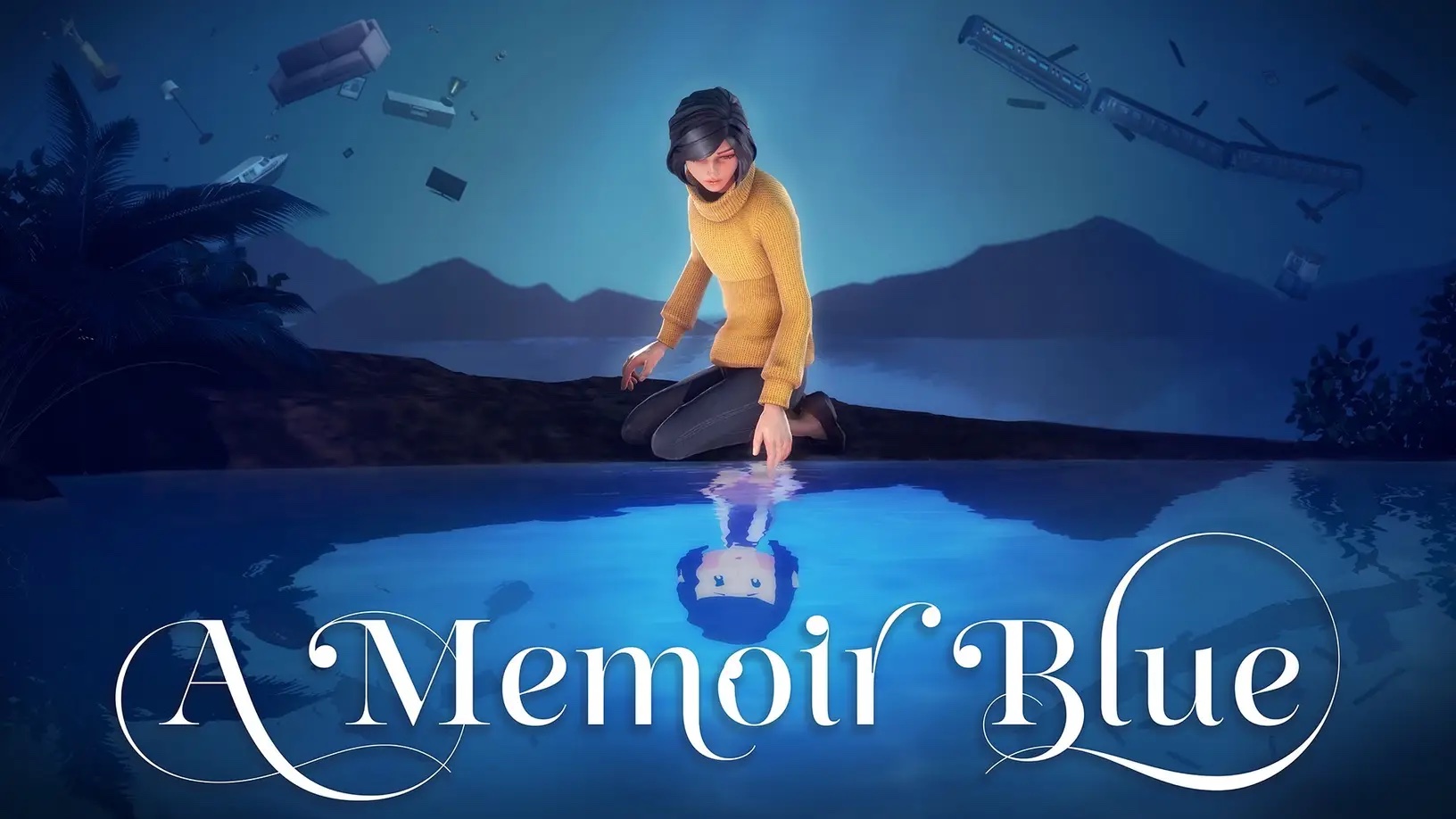 As is the case with many video games published by Annapurna Interactive, there’s nothing quite like A Memoir Blue on the market.

The upcoming title developed by Cloisters Interactive will undoubtedly be labeled as “games as art,” “interactive story” and a whole lot of other relatively meaningless subgenres to say that it boasts a unique narrative rather than action-heavy gameplay, but Shelley Chen’s first project as creative director and driving force is still going to catch plenty of people by surprise.

For starters, there’s no text or spoken dialog. The entire tale — which happens to be about the ups and downs of a championship-winning swimmer named Miriam — is told entirely through the player’s interactions and song, leaving plenty of space for interpretation and imagination to fill in the rest. Then there’s the art style, a blend of classic Disney-esque 2D animation and 3D elements to create a familiar, yet surreal vibe.

Knowing that she was creating a one-of-a-kind experience, Chen recruited composer Joel Corelitz (Halo Infinite, Gorogoa, The Unfinished Swan) to craft the score for A Memoir Blue. But Corelitz immediately recognized that while he could certainly create the overall score, the individual songs would need to be written and sung by someone who could relate more closely to Miriam and her journey, which led him to musicians Eric Hillman (who also scored Ashen) and Imogen Williams.

SPIN spoke with the quartet about their experience building the sounds and universe of A Memoir Blue ahead of its release.

SPIN: Considering that A Memoir Blue is so dependent on the music to tell the story, how did you go about deciding what you wanted to do with it?

Joel Corelitz: This score functions very much like the score to a film would function, and specifically the kind of score for a film that would have both a soundtrack component and a score component. In general, we wanted the songs to feel like they were licensed — that they had authenticity outside of this experience, but that they could apply kind of indirectly to it. They’re used very much like you would use a piece of licensed music in a film. It was very clear from watching footage from the game early on that this is a narrative experience. It’s an incredibly evocative story, and I think the best way to score it was just like a film. The score is all queue-based, so music comes in when it’s relevant to certain story points, to either conjure certain emotions or provide some context. The main difference compared to a film is that the music is not completely linear. There are places where the music loops indefinitely while it waits for player interaction. There are places where the player has some control over some of the melodies that get triggered and played during various interactive sequences. One of the challenges I always really enjoy as a game composer is the opportunity to take music and break it down into something that isn’t as linear as a score.

With A Memoir Blue being such a unique game, how would you describe the experience creating it compared to titles you’ve worked on in the past?

Shelley Chen: This is actually my first project as a creative director, and when we were making the prototype of this game, I was pretty sure that there was going to be something musical there. The narrative is based on the story of me and my mom from my childhood, and my family is super music-oriented — like my uncle is a musician, my mom was an opera singer, and I was trained as a musician when I was little — so my memories wouldn’t be complete without the songs and the score. But I come from a classical background and I don’t really listen to a lot of new things, so I thought it would be fun to combine my old school brain with [Joel’s] brand new ideas for a good mix.

Eric Hillman: I remember playing Gorogoa, and I think I just wrote Joel an email like, “Hey, this is a tremendous game experience and a great soundtrack. Love your work.” We stayed in touch after that, and then he told me that he was working on a score and there would be some song elements that he would like me to do because I work in both worlds — I write songs and produce records, but I also compose for games. It was my first time bringing those two worlds together and thinking about the best way to present a traditional song that would help tell a narrative in a game like this. I knew we definitely needed a female vocalist and songwriter so that we could get a better perspective on the story, so we sent over a few ideas to Shelley and her mom picked Imogen. We had worked on a project previously, so I knew her songwriting sensibilities were strong and her vocals are obviously out of this world.

Imogen WIlliams: I was very honored to be brought into this project. It’s my first ever delve into the video game world, and actually one of my first experiences writing to brief. I give myself my own briefs for my own songwriting — and I’ve done a couple of advert and short film things — but those go off of emotion rather than a story, so this is my first time doing that. The whole thing was really quite magical, because I was here in London smack bang in the middle of lockdown, so it was quite amazing to have that kind of transatlantic connection whilst in isolation. The material we were writing about was deeply emotional, and I really wanted to do it justice. I knew that it came from a personal space, and I just wanted to do the best I could with it. I did end up putting a lot of myself into the music, which was a really special thing to do.

What was it like having this small, but very international team working on this project together?

Corelitz: For me it was just about bringing in the right person for the project. I knew that I had my work cut out for me as the composer, but I didn’t feel like I had the right voice for these songs, specifically. I took on more of a music supervisor role for the songs while also composing the score, and tried to distill what the function of the songs was. Music in games is all about functionality — but never at the expense of emotion or any of that stuff — so I tried to communicate that in the most efficient way I could to Eric and Imogen. There was this incredible amount of creative momentum and this feeling that we were all contributing to something larger than just what you do. To me, that’s why I’m a composer.

Chen: I was probably the biggest burden on the team, being on the other side of the Earth in Taiwan, so when I talked to Joel, I was basically half asleep. There were times when developing this project was extremely lonely because I couldn’t go anywhere when I was working, but then Joel would send me a song and it would really warm me up. I sent them a lot of references from games like Kentucky Route Zero, and they did things that were beyond what I had even imagined. We have a couple of songs where the first time I heard them, I was like “This doesn’t need anything else,” and that really boosted my confidence on directing this project. I’m very thankful that Joel, Eric and Imogen are bringing more light to A Memoir Blue, because it’s a very weird project. It’s a very niche game, and some people will be like, “What the hell is this thing?” But the songs can bring them together.

In addition to being a very niche concept, the game also has a very unique aesthetic to it. How did you tie the soundtrack in with the visual art style?

Corelitz: It was clear to me that the palette of instruments we used had to have that timeless sensibility to them. The challenge was figuring out the traditional instrumentation and harmonic and melodic structures with the subtle electronic elements. It’s also the unique piano tone and the unique production that makes this experience unique, and I think that blend of timelessness and uniqueness was really the goal in my head the whole time. It just felt really natural. I wish I could say it was a struggle to figure out that balance, but it wasn’t. It just felt like it came together in a way that felt natural and supported the experience.

Chen: I’m a very serious control freak about everything in this game. If there’s one pixel off, I will have to fix that pixel to make it feel right to me. So when it came to the music on this project, I kind of had everything in my head already as to how different parts should feel. In Chinese classical and orchestral scores, they always mimic the moment — like a sound of animals or the objects. So when I imagined the music in this game, I automatically thought about mimicking or recreating the scene it was scoring. A lot of the time I would have so many comments and questions for Joel, because I’m a very stubborn person and he was adding new ideas and creativity to my stubborn imagination.