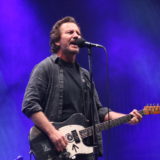 Eddie Vedder was slated to pull headlining double duty at his Ohana Festival this weekend with a solo set on Saturday and bringing Pearl Jam back to Southern California for the first time since 2013. However, following Kings of Leon’s sudden withdrawal on Thursday to tend to a family matter, Vedder sprung into action.

The day was slightly marred by a thunder and lightning warning, but things got cooking with the Regrettes, Black Pumas and a blistering set by My Morning Jacket that was extended due to the Kings’ absence before Vedder took the stage.

Previously at Ohana, Vedder performed solo acoustically with help from a few guests on occasion. Not tonight.

Opening with a cover of R.E.M.’s “Drive” that featured on the Flag Day soundtrack, Vedder dedicated a moving version of “Long Road” to Betty Ann Murphy, the mother of Nathan, Caleb and Jared Followill who died on Friday, which was followed by a cover of Kings of Leon’s early hit “Molly’s Chambers” where he could be seen (and heard) giving instructions on how to play the song. Vedder’s set also featured another musician making her debut: his daughter Olivia. Making a quip about knowing her her whole life, the younger Vedder sang “My Father’s Daughter,” also from the Flag Day soundtrack. They also debuted his recently released new single “Long Way” from a forthcoming solo album, Earthling.

Following a spunky version of “Corduroy” and with the clock ticking close to curfew time, the group covered the Pretenders’ “Precious” (Pretenders were supposed to play the 2020 edition) and the last part of “Purple Rain.”

Check out the setlist and videos below: