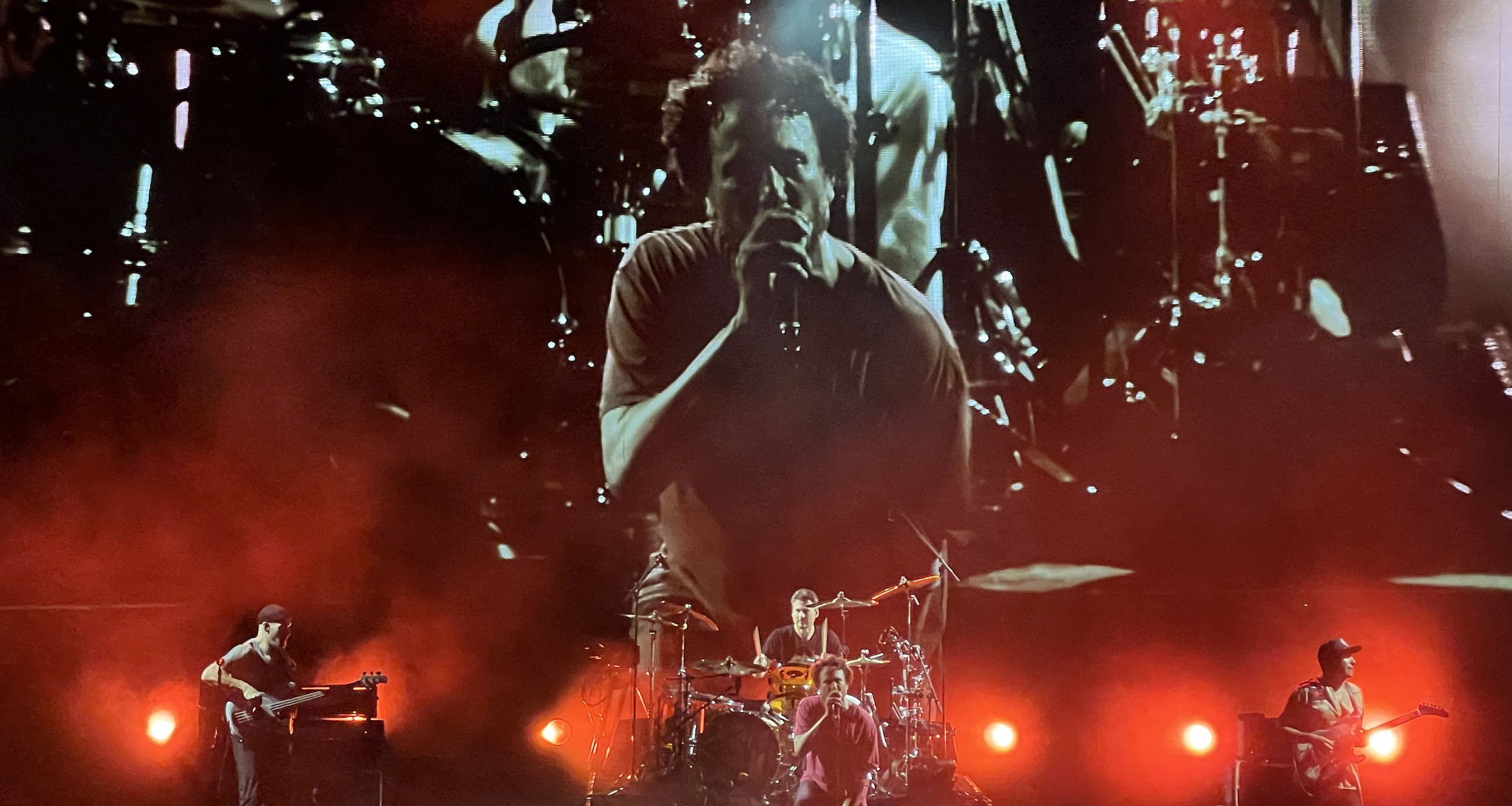 Rage Against The Machine finally kicked off their Public Service Announcement Tour last night, and Run The Jewels might have summarized it best while wrapping up their opening slot at Wisconsin’s Alpine Valley Theater before introducing the headliners. “It’s the oldest story there is. It’s us versus them,” said Killer Mike, referring to the people versus the powers that be.

While it seems like all D.C. can do lately is offer thoughts and prayers, leave it to Zack de la Rocha, Tom Morello, Brad Wilk and Tim Commerford to reclaim their position as the voice of the people. The newly reunited provocateurs’ 90-minute, 16-song set brought all their trademark sound and the fury at the most appropriate time possible, answering America’s proverbial Bat signal that’s been left flickering the past few years.

There was plenty of inequity and oppression to rage about when the band was last active 11 years ago (their last show was at the Los Angeles Memorial Coliseum in 2011), but the past few years have further shrouded America behind the veil of Trump, the murders of George Floyd and Breonna Taylor, the threat of border walls, rampant mass shootings and most recently the overturning of Roe v. Wade. And the band took aim at it all as a series of artful video vignettes accompanied their protest music that still bears repeating in 2022.

Starting the set with the cannonball shot of “Bombtrack,” large screens magnified each of the band members under the shadow of large block text that professed “Fear Is Your Only God.” It only escalated from there as Rage moved their target from church to state. During the penultimate number – a powerful pairing of “Freedom” with some of “Township Rebellion” – the series of messages on the screens espoused the hypocrisies of a country that now mandates forced birth, before the mic drop moment as another message read, “Abort the Supreme Court.” The latest overturn has been a cause close to Rage Against The Machine who pledged to donate just about a half-million dollars from ticket sales on this night and the upcoming double header in Chicago to reproductive rights organizations in Wisconsin and Illinois.

Their bold comeuppance for the judicial branch elicited the loudest howls of the night from a crowd whose bated breath had early on created a palpable cloud of anticipation that rained over the venue as soon as Rage hit the first few notes. Ticket holders have been waiting on this reunion since 2020 when the pandemic created a major, though unavoidable, buzzkill. As buses shuttled in fans from a good portion of all 50 states (many could be overheard trying to outdo one another’s travel stories) and people took their seats, people could be seen in their “Evil Empire” and “Make America Rage Again” shirts flexing and stretching to warm up for the night. (As anyone who’s been to a Rage show knows, it’s not just the name of the band.) The physicality wasn’t on the level of the 2008 Lollapalooza gate crashers, yet as waves of people cascaded into each other in the pit, it felt symbolic of a mass unleashing of months and years of pent-up frustration. It was no more evident than on each “fuck you” in “Killing In The Name” or when De la Rocha belted out “They say, ‘Jump,’ you say, ‘How high?’” on “Bullet In The Head,” when people were all too ready to show him.

Rage had just as much of a pulse, looking and sounding as if they had never taken time apart. Though the band wasn’t outwardly soapboxing on this night as some might have expected, they put their messages on the screens and wore them on their sleeves (Morello donning an I Heart CRT T-shirt, presumably to support teachings of Critical Race Theory), while further bucking standards by forgoing a traditional encore and keeping a pretty modest setup. These were statements of rebellion on their own, offered by four talents who used every minute on stage to shock and awe by pointing out the very truths we can’t overlook. Morello was masterful as ever on guitar, his wailing shrieks and frenetic teeth-picking a show all of their own while Wilk and Commerford were the backbone of the steady but explosive sonic assault. And De la Rocha – he can still spit out rhymes like the beautiful poet he’s always been.

Though there were attempts before this ultimate reunion to bring back the material with the birth of acts like Prophets of Rage (who also deserve a lot of credit), Rage Against The Machine is truly the sum of all four parts. Now that they are back together, the real question is – will there be new material? It’s not like the dismal state of affairs isn’t ripe with inspiration for the taking. And coupled with like-minded bands like the exceptional openers Run The Jewels, the PSA tour may be one of the most important staged at this critical venture. You have to believe that when De la Rocha belted out those famous lines of “Guerilla Radio” – “It has to start somewhere, it has to start some time. What better place than here, what better time than now?” – he truly meant it as a rally call for everyone present.

Tags: rage against the machine, Reviews