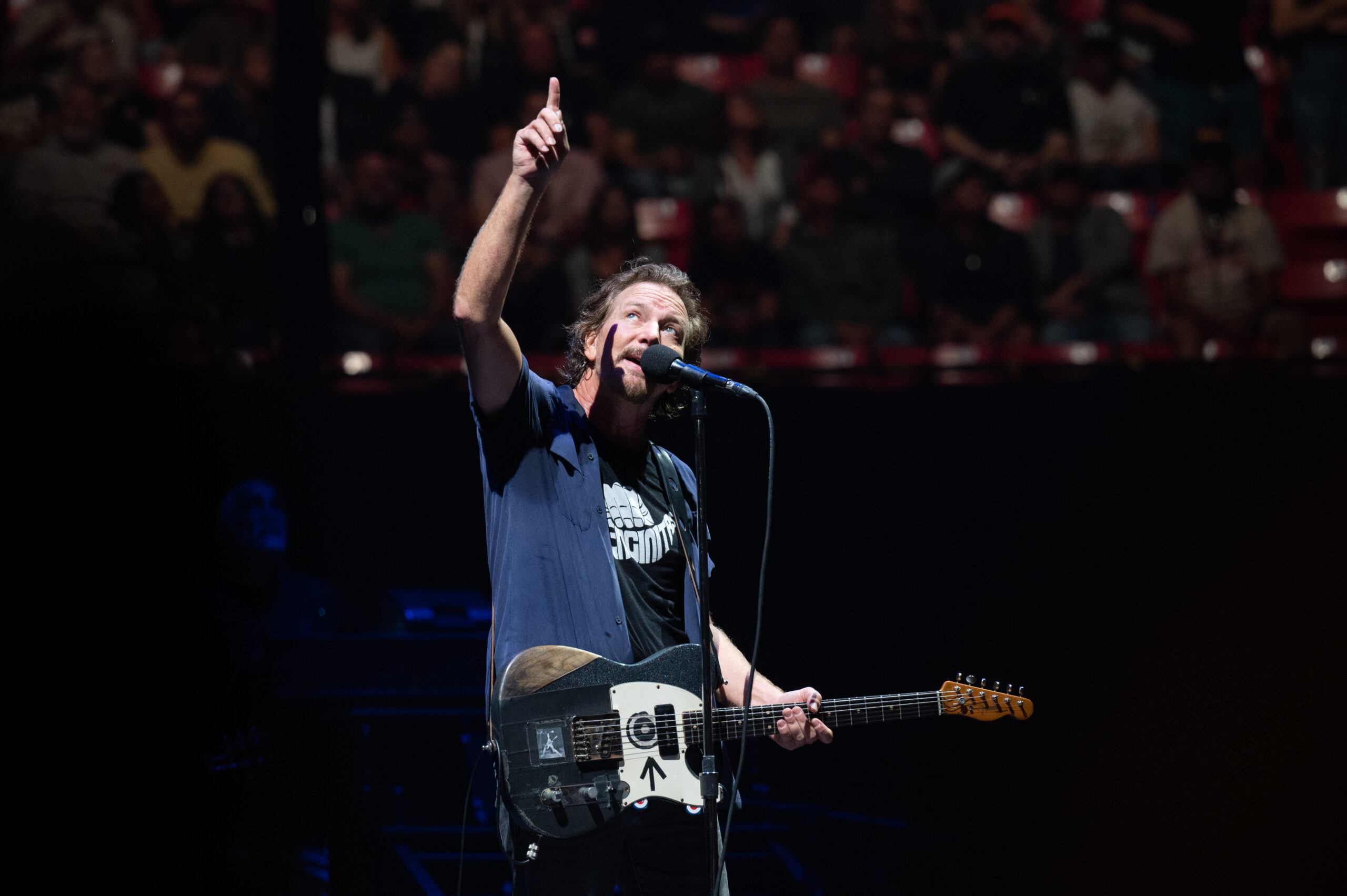 Pearl Jam was in a reflective mood last night (May 3) at San Diego’s Viejas Arena for the oft-postponed opener of its North American tour in support of the 2020 album Gigaton. Performing in a city where both frontman Eddie Vedder and drummer Matt Cameron have long-standing roots, the band saluted a host of friends and family in the audience, as well as Foo Fighters drummer Taylor Hawkins, who died suddenly in March.

Vedder revealed early in the show that Pearl Jam had chosen songs that had “something to do with the ocean, even if they don’t mention it in the words. Half of them were written in the ocean anyway.” Indeed, beyond opener “Oceans,” “Amongst the Waves” and “Given to Fly,” the band also played its famed “Mamasan” trilogy of “Alive,” “Once” and “Footsteps” (albeit in reverse order – a first since 2011), which Vedder wrote in the nearby Pacific Ocean after receiving a pre-Pearl Jam instrumental demo tape from his friend Jack Irons in the fall of 1990.

Vedder said his mom (who earned a Masters degree later in life from San Diego State University), brothers, uncle and nephews were all in attendance, as well as NBA star Bill Walton and Vedder’s childhood guitar teacher Bud Whitcomb, who owns local music store American Music Exchange. He dedicated “Long Road” to his late brother Chris, who worked as a rigger at Viejas Arena prior to his death in a 2016 climbing accident.

“We lost him pretty quick and it fucked us up, but we got through it together,” Vedder said. “The last time we played here, he was working up in rigging. There’s a plaque here up in the rafters with his name on it.”

Prior to the Gigaton song “Quick Escape,” Vedder paid tribute to Cameron’s close friendship with Hawkins (the two drummers played a Queen cover together last fall at Vedder’s Ohana festival). “He emitted something very incredible and very special. We’re all missing him, and so, Matt, I’m sorry again for your loss,” he said. “But it just gives us another chance to say how much we appreciate you as well.”

One subject Vedder did not address was Monday’s leak of a draft Supreme Court decision that would essentially reverse the right to an abortion guaranteed by Roe vs. Wade. The issue has been core to Pearl Jam’s activism since the early 1990s, as Vedder detailed in a 1992 opinion piece for SPIN.

The setlist was dominated by material from Gigaton (eight songs) and Ten (six), with two songs each from Vs. and Vitalogy and none from the albums No Code, Riot Act and Pearl Jam (colloquially known as Avocado). In an unusual twist, Pearl Jam did not perform any covers and did not close with its standard end-of-show tune, “Yellow Ledbetter,” instead playing “Alive” as the finale with all the house lights on.

The Gigaton tour continues Friday and Saturday in Los Angeles.

“Keep Me in Your Heart” (Vedder solo, before Pluralone opening set)
“Oceans”
“Retrograde”
“Never Destination”
“Corduroy”
“Dance of the Clairvoyants”
“Amongst the Waves”
“Even Flow”
“Who Ever Said”
“Quick Escape”
“Long Road”
“Given To Fly”
“Superblood Wolfmoon”
“Daughter”
“Seven O’Clock”
“Jeremy”
“Porch”