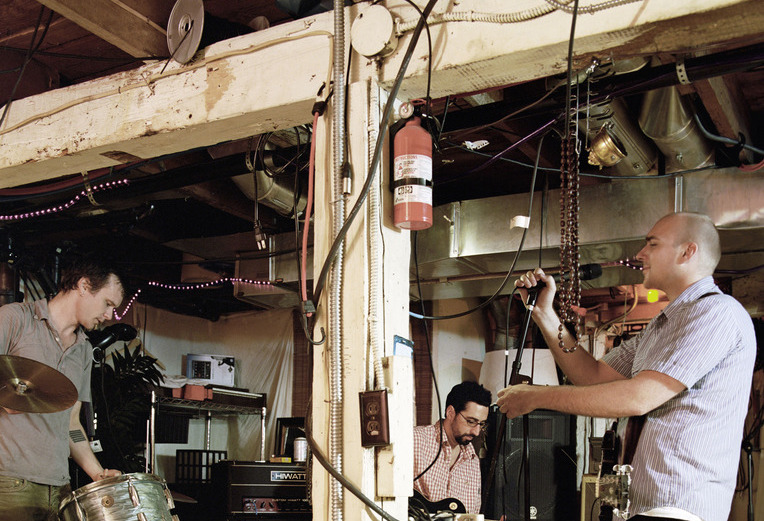 Influential emo band Sunny Day Real Estate is reuniting for the first time in 12 years for shows this spring, but without original bassist Nate Mendel, SPIN has learned. According to people familiar with the situation, this incarnation of the group will include original vocalist/guitarist Jeremy Enigk, guitarist Dan Hoerner and drummer William Goldsmith playing with as-yet-unnamed additional musicians. No additional details were available and group members were unavailable for comment.

Goldsmith has been teasing a reunion for several days on his Instagram feed, where he’s shared videos of him rehearsing drum parts for a variety of Sunny Day Real Estate songs and a screenshot of a text message exchange with Hoerner. A new Instagram account, @SDREtour, also appeared last week but has yet to post any content.

Sunny Day Real Estate formed in Seattle in 1992 and released the hugely influential Sub Pop albums Diary (1994) and the colloquially named The Pink Album (1995), but disbanded amid internal tensions before the second album was even released. The group was beloved for its emotionally resonant music and intense live performances, which directly led to Sub Pop offering them a record deal during the alternative rock explosion of the early 1990s.

“It was literally like watching U2 in 1980 and was one of the five best shows I’ve ever seen in my entire life,” Sub Pop publicist Nils Bernstein told Fifty Grande of Sunny Day’s May 1993 gig at Seattle’s Crocodile Cafe, which drew a very sparse crowd. “Imagine that first record being played exactly like it sounds on the record, except more intense and emotional. We signed them instantly, or at least told them that we would.”

After Sunny Day’s initial split, Mendel and Goldsmith joined Dave Grohl in Foo Fighters in time for that band’s maiden tour in spring 1995, while Enigk recorded a well-regarded Sub Pop solo album, Return of the Frog Queen. Goldsmith left the Foos in 1997, but Mendel has remained in the band to this day and was inducted into the Rock and Roll of Fame with them last year.

In 1998, Sunny Day reunited for the first time (without Mendel) and released a final Sub Pop album, How It Feels To Be Something On, and then a one-off for now-defunct Time Bomb Records, “The Rising Tide,” in 2000. The group broke up again the following year, but reassembled shortly thereafter with Mendel and without Hoerner in a new band, The Fire Theft, which was active until 2004.

Spurred by a Sub Pop reissue campaign around the first three albums, the original Sunny Day Real Estate quartet got back together for a tour in 2009-2010, when a break in Foo Fighters activity made it possible for Mendel to participate. Some new music was recorded after the trek ended, but tensions flared again and the project was abandoned. A lone new song, “Lipton Witch,” was released in 2014 on a split seven-inch single with Circa Survive for Record Store Day.

Enigk had been scheduled to join Thursday, Cursive and The Appleseed Cast on a North American tour this winter, but recently pulled out of all but the Seattle and Portland stops for unspecified reasons. Goldsmith is working on a new album with his band Assertion, which will be the follow-up to last year’s debut release, “Intermission.” Mendel will be back on tour with Foo Fighters starting at the Innings Festival in Arizona on Feb. 26, the day after the group’s horror film Studio 666 hits theaters.