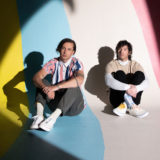 Twenty One Pilots have released “Choker,” the second track ahead of Scaled And Icy, their first studio album in three years, which arrives May 21 via Fueled By Ramen, “Choker” arrives with a music video directed by Mark Eshleman, shot in the band’s hometown of Columbus, Ohio.

“Choker” follows on the heels of Scaled And Icy’s lead single, “Shy Away,” which was released with a Miles & AJ-directed video and is available as an instant grat download alongside “Choker” with all pre-orders of Scaled And Icy. The album will also be available in a special edition box set limited to 35,000 copies worldwide.

The full tracklisting for the album was shared with the release of “Shy Away.”

Lyrics for the poignant “Choker” include “I know it’s over / I was born a choker / Nobody’s coming for me. / I see no volunteers to co-sign on my fears / I’ll sign on the line / Alone.”

Check out the tune below.

Also during the pandemic, the duo officially broke the Guinness World Record with their history-making regenerative visual for “Level of Concern.” Every three minutes and forty seconds a new music video was created and streamed live to YouTube. It broadcasted for 177 days straight with a total run time of 4,264 hours, 10 mins, 25 seconds.