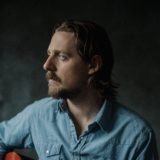 Sturgill Simpson’s take on the John Prine classic “Paradise” was released today, ahead of the tribute LP Broken Hearts and Dirty Windows: Songs of John Prine, Vol. 2, out Oct. 8 on Oh Boy Records.

“Paradise” was the last song to be recorded at The Butcher Shoppe—the studio Prine founded with Grammy Award-winning producer and engineer David Ferguson—before the building’s demolition planned for later this year.

“For myself along with many others, he was a mentor,” Simpson said of Prine in a statement. “He was very giving with his time and wisdom, and we were all grateful to get to know him.”

Each month leading up to the October release, Oh Boy will uncover a new artist and cover that will appear on the forthcoming album. “Paradise” follows Brandi Carlile’s rendition of “I Remember Everything” which SPIN covers here.

Listen to Simpson’s cover below.

Though it won’t be shipped until October, if you pre-order it here, you can get an immediate digital download of the entire set.