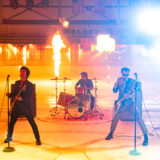 Around this time last year, Green Day released their 13th studio album, Father of All… Obviously, they haven’t been able to tour behind it just yet (they were one of the first groups to postpone their tour dates due to COVID), but nevertheless, it seems like they’re continuing to crank away at new music.

On Saturday, the group shared a new song and video for “Here Comes the Shock” that aired during the NHL’s Outdoor Games from Lake Tahoe. In the video for the rapid-fire song, Green Day tapped Hilken Mancini to lead a session of punk rock aerobics that’s probably a good home workout for these times. Or as they described it in the song’s caption on YouTube: “Time to break a sweat with Punk Rock Aerobics in the video for ‘Here Comes The Shock.’”

Watch the video for “Here Comes the Shock” below.

Late last year, singer Billie Joe Armstrong released a compilation of his No Fun Mondays cover compilation that saw him pay tribute to the songs that inspired him. We spoke to him about that album and he broke down the personal meaning of why the songs were important to him. You can read our interview with the singer here.

As for the band’s Hella Mega Tour with Weezer and Fall Out Boy, that’s tentatively slated to begin later this year.